As you might rememeber some of my New Year resolutions were not connected with PCs or electronics. One of the things that I wanted to focus on is historical reenactment. Although my early medieval kit is not yet finished I would like to show you couple of old pictures of the textil-part of the whole thing. 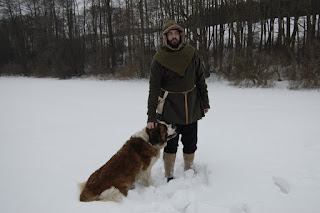 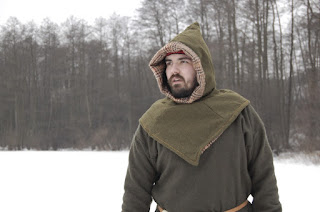 The basic set consists of trousers based on the Thorsberg and Damendorf bog finds. Although they are not medieval at all - dated to around IV century - a find from Skjodelhamn resembles this pattern and allows me to claim that this is accurate. The set consists also from two tunics - silk undertunic and a thicker green, wool tunic (unfinished as for now). On the head I have a felt cap and a hood based on the hood found in Skjodelhamn. The hood is made from two layers of wool, one thin for the shell and a thick fluffy layer inside. The belt bag is also made from felt with red felt appliqués and silver silk embroidery. The belt is not period. 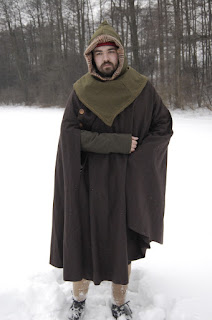 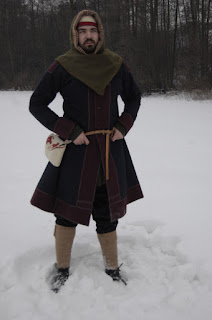 For colder weather I have an cloak (half a circle with wooden buttons) or a kaftan made from felt. The kaftan has small glass buttons (hand made) for closing. Good thing about this piece of garment is the fact that this is almost completely waterproof.

This is not everything that I have now for this period. Surely I will post more pictures soon (although I do not know how soon). I have to finish the tunic and belt to have something new. In the mean time I have received period shoes and I'm waiting for some pieces of military equipment.

The photos were made by M. Niedlich
2 komentarze:

Okay, so I had some spare time to tinker with the Analog I/O card. Unfortunatelly I do not have much info now:
Now this project is going a bit on hold. I have to obtain a motherboard with ISA connector and as powerful as possible (for the sake of convinience). I have locates several like that, so this is matter of time only. The problem is that I do not have any PC that 1) has OS on it, 2) is able to fit the card inside. And also - I would not like to test a '97 card on a '90 PC. It is hard without complicating it like that ;).
Brak komentarzy:

Setup for optoelectronic characterization of nanostructures

So I managed finally to put together the setup for optoelectronic characterization of nanostructures, consisting of a wide-field fluorescent microscope that we have at work in the institute and my set of devices, namely the precise ammeter and electrode holders together with two power supplies (one for powering the ammeter, second one for polarizing the sample. Sorry for the low quality of photos, but I have only ma cellphone camera here at the moment.


Electrode holders are placed on a metallic plate (in order to fix them to the microscope using small neodymium magnets). The electrodes are made of sewing needles (cheap, easy to get and with a  sharp tip). 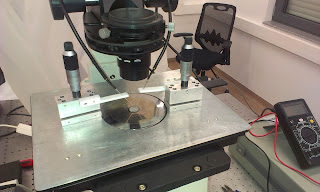 Here is the operator view of the whole setup. On the right there is also an PC that is collecting the data from the CCD camera in the microscope and from the picoammeter, using an National Instruments USB DAQ. On the right, next to the microscope, is the PSU used for polarizing the sample. It is capable of outputting up to 200 W or 40 V, whatever is lower at the current moment. 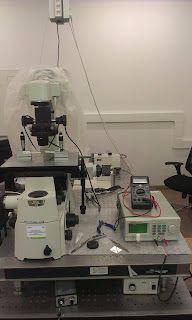 And here is the side view of the setup with the bug PSU powering the ammeter on the right, the ammeter and USB DAQ behind it. The computer controlling the whole thing is not shown here. 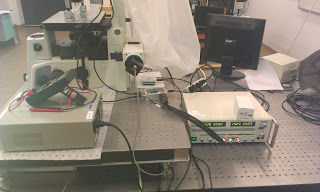 So stay tuned for some preliminary results (as soon as I obtain anything that is worth showing).

Some time ago I have acquired this card. It has plenty of interesting ICs on it, so I though about buying it before thinking about any use of it or at lest checking if there are any manuals and/or drivers.


The card was produced by a german company disys GmbH. The manufacturer showed me a general middle finger by saying that this card is unsupported, the backup with manuals and drivers and any other possible documentation is gone/dead/broken buuuuuuuut they could possibly try to find the documentation if I pay around 500 euro. Come on - how greedy a company has to be and how messy it has to be inside to ask something like that. If you ask me, this does not tell any good about the company.

None the less I intend to, at least, try to make this card working again. In order to do this first I need to identyfy some kind of drivers for this device and then do whatever is needed to interface to it. I guess this is worth the labor, as this card seems to have various interesting features, judging by the ICs that are on board:

Lattice ispLSI1032 - a 60 MHz CPLD, together with several HCTs and PALs working as the glue logic I guess.  Also three FIFO CMOS Memory ICs (50MHz AM7210), what suggests that the card should has some fast input (up to 50 MHz I guess). The card also has two Nec D71054 CMOS 8MHz counters. There is an 74HCT688 address decoder, that is close to the address jumpers (not seen here). I hope this will allow me to get the card physical address in order to start debugging. 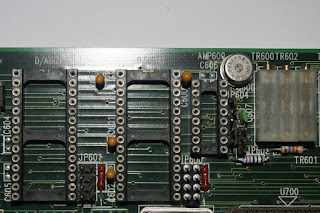 The analog section is quite interesting. The card is capable of having D/A (digital to analog) and A/D  (analog to digital) converters together with PGAs (programmable gain amplifier) and analog MUXes (multiplexer). Unfortunately not all sockets are filled. In the D/A section is completely empty (not counting a single transistor Q600 and three precise potentiometers TR600..602. The Q600 is an RFL1P08 P-channel MOSFET from Harris. 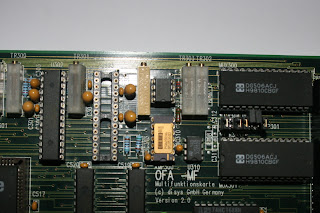 The A/D section is partially filed. There is one A/D converter - ADS7804 by Burr Brown and an programmable amplifier PGA202, also by Burr Brown. The ICs on the right are two CMOS analog multiplexers - DG506. 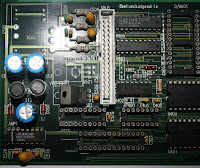 There is also an DC/DC converter on the board, but it is missing an transformer, as far as I understand. The Converter is controlled by MAX743


There are also several connectors for additional features. One, neat the DC/DC converter is called XBUS, and the second one is near the output of the card. The second one is designated "Add On Board Stecker", and probably is designed for a daughterboard or something similar.

The output of the card is a single DB50 connector seen below. Up to now I do not know any pinout of it, but this is one of the first thing I'm willing to check. Second thing that I plan to is checking if the board is electrically okay and putting it into a working PC in order to try to run some tests.
Brak komentarzy:

I use a rifle that started as a gen III HJ416 by JG. After injecting it with some money and labor it looks like shown below (sorry for the mess around). Changes were focused mainly on the visual side, but few technical issues also was altered. 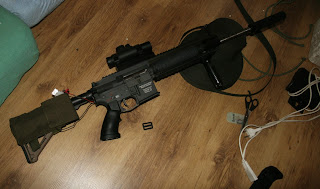 Most important external change that I have done is having a metal body instead of ABS one. The body is by DBoy and has all original markings (as the ABS body by JG had). Front RIS is the original (JG) one, and this is a bit problematic, due to several issues - one is the color (the difference is not that dramatic, but still it is clearly different) and the second one is the height of the top rail. The rails mismatch by around 2..3 mm, so in order to mask that and also make the whole rifle more stiff I have mounted an RIS extender (or whatever it is called) on the joint and put the optics there. The  sight is a classical closed red dot (reflex) sigh by King Arms. Also I have changed the pistol grip (DBoy) and the trigger guard (Magpul). Inside the front RIS I have installed a new, custom made RIS holder (an alumina cross, that is fixed to the barrel) and gas piston. 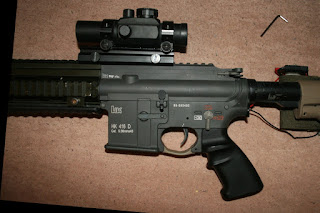 In the place of the odl (and crappy looking) crane stock I have installed an Magpul MOE stock in the same collor as the trigger guard (a khaki-like something). On the stock I have an magazine pouch that is utilized for holding the battery - an 8,4 V, 3000 mAh Traxxas NiMH. Having the battery, especially this heavy, on the stock feels much better than having it in the AN/PEQ replica. Also this accu is too big for the AN/PEQ replica. The only remaning problem are the cables, but this will be solved somehow soon (I hope). 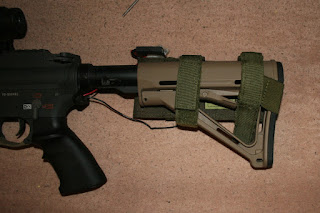 Inside of the gearbox not much was changed. As the gen III JGs are quite good and reliable I opted only for changing the spring and piston for something more reliable. The old spring was quite compacted so I have installed an SP 130 from guarder. Also a new cylinder, cylinder head and piston was installed, all by SHS. I had to add some teflon on the cylinder head, though it was double sealed. As you can see the new cylinder is type 0. This was followed by installing an longer 6.04 mm inner barrel. 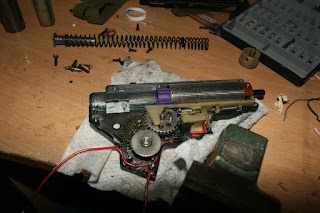 To hide the barrel I used an barrel extender and a silencer. The inner barrel ends around the middle of the silencer so it has some chance to silence to sound of the BB pellet going out from the barrel ;-). Although I do not care much about this. The silencer also had HK markings, but I do not know what kind of replica this is. The barrel extender is still unpainted, but I plan to do it in the next few days. After that I have to borrow a chronometer to check how good the SP130 spring is working and do I really have ~130 m/s BBs flying around. 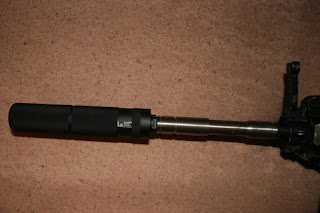