I'm back after some time of being occupied by other tasks, that were not worthy of being published here ;-). I have completed my book-sized industrial PC.

I have received this machine some time ago from a friend of mine. It was used in his company in some complicated systems, and had it's BIOS exchanged for a custom one. This was the first and only big problem about this machine. I have tried exchanging the BIOS from the 'inside' using AWDFlash, but with no success, so I had to ask the same friend for more help - he burned the EEPROM with a proper BIOS *.bin file using a EEPROM burner. Now it worked, so I only had to install the OS (Win XP Proffesional SP2) and all drivers. 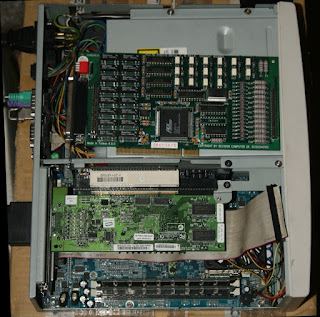 For this PC I have obtained (from ebay) a Nvidia Quadro NVS 200 PCI graphics card (64 MB) capable of feeding two VGAs (I'm currently using one, but plan to use two, why not). Apart from that - Pentium III 633 MHz (overclocked 550 MHZ Coppermine) and 512 MB of RAM (chipsets maximum unfortunately). The more interesting part of the PC is the I/O PCI card that I have added - seen on top. This is an DIO card (Digital I/O) - 16 relay inputs and 16 photo-isolated inputs. This will go very well with the whole array of ports the card has: four serials (RS-232/422/485 configurable), two parallels and two USBs. 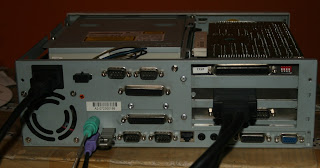 The PC is quite compact, so I guess there will be some trouble with heat inside, especially when I will exchange the processor for a PIII Tualatin (preferably 1400 MHz PIII-S version) - this is the only upgrade that is still pending due to the lack of a suitable CPU, and general scarceness of such. Still this is a great addition to my collection and one of few that has potential application (but I do not want to say anything about that for now, as the grant proposal is sent but not graded by now). Next addition to this setup is a touch-screen LCD. It has a cool RS-232 interface, so it should not be hard to put it together. The harder part is to put the touch-screen part and the LCD part together without breaking anything. I have to find proper tape for mending it together and a foam spacer tape for making a spacer between the LCD and touch-screen.

I would like to thank again the 'anonymous' donors: of this machine and many more things ;-) for donating my collection with extremely nice hardware and helping me put it together.
Brak komentarzy: