Scarf (through the ages)

Recently, when I have finished my doublet and shirt I've noticed that the neck opening is really wide. As so it does not provide much of protection in cold weather. A natural way out of thi problem would be to wear a hood. But I have not noticed hood-wearing Landsknecht soldiers. So maybe a scarf? Then it all started - when scarves were used? do we have any proof of it's use before modern times? A scarf seems to be extremely simple piece of garment but from some reasons it is not as popular as expected.

For now I want only to hoard some pictures that I have found up to date. Maybe somene will be able to update my list and will help me to find any proof for a scarf in XII/XIII or XVI century.

But, starting from antiquity:

In early medieval the scarves were also used, although not as often as by Romans. I have managed only to find one clear depiction. Additionally I heard some stuff about scarf usage by the vikings but without any proof whatsoever The source is Stuttgart Pasalter from the first halve of the IX century: 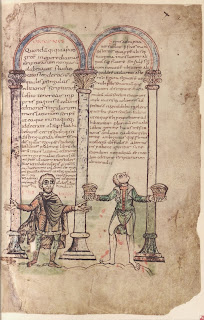 And following that we have Lubin Codex from the II half of XIV century:


And finally, long after medieval times, we have the cravat from the '30s of the XVII century:


Cravat is a piece of garment adapted by the French from Croatian (hence the name) mercenaries. After that cravat-scarf is more or less gaining its popularity very fast, and the rest is well known (and not really interesting for me).

Okay, so we have antiquity - IX c. - XIV c. and XVII c. without anything in between (?). Seems odd.. I'll be investigating the thing further. Contact me if you have any additional info.

Last few days (or rather few weekends) I was busy making a shirt for the XVI century Landsknecht kit. Finally it's ready and I can show me new shirt. It looks like so: 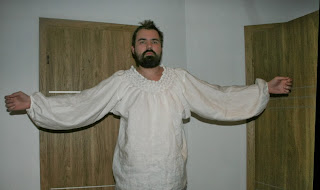 And with the doublet: 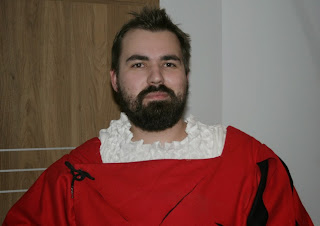 The pattern is classical for this kind of garment. (see below):

I have only omitted the side gores, that are sometimes used (not in this pattern), as the shirt is very wide and the gores are totally unnecessary. Of course I have kept the underarm gussets, as they seem to be crucial for a period shirt. The point is to make everything extremally wide. The

The smocking around the neck is based on this painting:

I have used this tutorial in order to learn how to do that and must say that this is amazingly fast and easy. The only mistake I made was making the marks 2 cm apart. It would be much better if they would be 1.5 cm or 1 cm apart giving a finer smock.

And that's all. I hope it looks as good as expected. The next thing - a hood based on Sebald Beham woodcut :